Pebble in the Sky By Isaac Asimov

Pebble in the Sky
By Isaac Asimov
Copyright 1950

Joseph Schwartz is a retired Jewish tailor living in New York City. He enjoys is humdrum life in the Big Apple of the 1940s. One day, while taking a walk, he is hit by an errant experimental beam and is catapulted into a world that is totally alien to him. 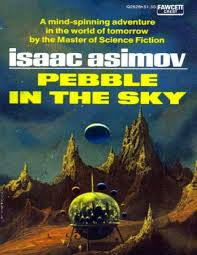 He finds a farm with a house made of plastic. He can not speak the language the couple there speak, but they take him in as a farm hand. Harboring unregistered people in this time on Earth is a crime and the farmer grows nervous. So, he takes him to a local scientist, Dr. Affret Shrekt, who subjects him to an experimental beam that is supposed to enhance his intelligence.

Meanwhile, an anthropologist from the Galactic Empire, Dr. Bel Arvardan is visiting earth to study earthmen. Earthmen are regarded as the lowest form of life in the empire. Their planet is mostly radioactive. They are uncultured, unsophisticated, and contribute little to the empire in general.

However, there is a theory that all life in the thousands of planets that comprise the Trantorian Empire originated from Earth (as we know from the Robot series). Arvardan is on Earth to explore that theory.

Schwartz soon develops extraordinary intelligence and eventually super abilities to read minds. Using these abilities, he learns of a plot by Earth’s leadership to spread a deadly virus throughout the galaxy – a virus harmless to earthmen, but deadly to the inhabitants of other planets. He enlists Shekt, Shekt’s daughter, Pola, and Arvardan in an effort to thwart the plot.

The group is captured by earth’s leadership and drugged. While they are held prisoner, Schwartz’s abilities continue to grow and he is eventually able to dominate the leader of the earth’s forces. He convinces a pilot to bomb the installation in St. Louis where the biological weapons are housed, saving the Empire.

Pebble in the Sky is one of Asimov’s earliest efforts and therefore one of his most simplistic. The simplicity did not detract from the reading enjoyment. Instead, it enhanced it and made it superior to the second novel in the series, The Currents of Space which was too complex without corresponding character development.

It starts out quite weak. Perhaps that stems from being technologically dated. But the beam that sends Schwartz thousands of years into the future read like a third grade attempt at science fiction. From that point on, Pebble in the Sky had all the charm of a Golden Age Sci-Fi novel with a fast pace, linear plot, and predictable characters. That is not what people usually look for in a good novel. But, when reading Sci-Fi from this era, it is refreshing to read something so light and enjoyable.

Posted by Brian Schwartz at 4:28 PM