Biron Farrill is a student on Earth, completing his college studies when he detects a bomb in his dorm room. He escapes, but is whisked away after a professor informs him that his father, a political dissident, has been murdered by the Tyranni who rule many star systems. 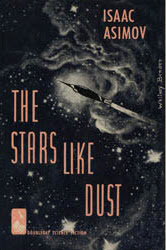 He is sent to Rhodia, one of Tyran’s conquered planets, to learn about a plot to overthrow Tyranni rule. He is betrayed by the Director of Rhodia and is forced to flee with the Director’s daughter, Artemisia and her uncle Gilbert. They travel to the planet Lingane to meet with dissidents there.

There, they meet the Autarch of Lingane (who is revealed to be Sander Jonti, the man who sent Farrill to Rhodia from Earth), who seems to possess knowledge of a rebellion world. With him and his followers, the group travel to the heart of the Horsehead Nebula — they believe that for any rebellion world to exist and not be known to the Tyranni, it must be located in a place like the Horsehead Nebula.

The Tyranni spaceship stolen by Farrill is being tracked by a fleet of Tyranni vessels led by Simok Aratap, the Tyrannian Commissioner. With him is the Director, who is shown to be nervous about his daughter's and brother's well-being. They keep themselves at a distance for fear of Farrill discovering them until Farrill lands on one planet in the heart of the nebula.

The Autarch believes that the planet is the rebellion world. However, there is no sign of life anywhere. When the Autarch and Farrill leave the spaceship to apparently set up a radio transmitter, Farrill faces the Autarch and accuses him of getting his father killed at the hands of the Tyranni. The Autarch affirms the accusation, to which Farrill adds that the Autarch feared his father's growing reputation. That is why he arranged Farrill's father's death.

In a fight, Farrill subdues the Autarch with help from the Autarch's aide, Tedor Rizzet, who reveals that he is ashamed of the Autarch for killing a great man like Farrill's father. Later, as Farrill and Rizzet try to explain everything to the rest of the crew they picked up from Lingane, the Tyranni fleet arrives and takes them prisoner. Aratap interrogates Farrill, Artemisia, Gillbret and Rizzet in order to ascertain the coordinates of the rebellion world but they do not know where it is. However, the Autarch reveals the coordinates to Aratap. Rizzet kills the Autarch with a blaster in anger.

While Aratap interrogates Farrill, Gillbret manages to escape to the engine room of the spaceship and short the hyperatomics. Farrill, realising the danger, manages to contact Aratap. The engines are repaired, but Gillbret is injured and later dies.

The space jump is made with the coordinates given to them by the late Autarch. However, they find a planetless system consisting only of a white-dwarf star. Aratap lets Farrill and the others go, believing that there is no rebellion world. Aratap makes it clear that he will never to be chosen as Director. Biron and Artemisia are allowed to marry.

It is eventually revealed that there is indeed a rebellion in the making, located on Rhodia itself. The Director is its leader; he deliberately took on the persona of a nervous and timid old man to throw off suspicion from himself and his planet.

It is further revealed that the Director, who possesses a collection of ancient documents, has searched for, and found, a document that will help a future empire-yet-to-be (likely Trantor) govern the galaxy. This document is ultimately revealed to be the United States Constitution.

The Stars, Like Dust works on a level not achieved by The Currents of Space or Pebble in the Sky. It does not try to be a complex spy thriller told in less than 200 pages. Nor does it get weighed down in heavy politics or distracting and ineffective subplots. The Stars, Like Dust is pure space opera loaded with shootouts, space trips, mysterious planets, and evil bad guys.

This is not, in and of itself, the definition of good science fiction. Subplots, intrigue, complex schemes and thick character development are all ingredients of great general fiction and genre fiction. But when an author tries and fails to effectively incorporate these elements into the story, the result is drudgery for the reader. When an author tries, and succeeds to tell a simple, but exciting, story, that’s reading gold.

This is not to say The Stars, Like Dust was a great story telling achievement. It had a couple serious flaws. The first was the introduction of a mysterious document Biron was supposed to secretly obtain on Earth that was so powerful it would help foment revolution. This is the book’s only subplot and mercifully, Asimov dismisses his own foolishness until near the end when the characters have an, “oh yeah, what about that?” moment.

That document is, of course, the U.S. Constitution. While I am as reverent of the Constitution and its principles as anyone, I hate to see it inserted into science fiction. I can’t help but remember William Shatner’s melodramatic reading of the Preamble in the Star Trek episode, The Omega Glory. That is a painful memory. This subplot didn’t need to be there.

Of course, there is also the dated sexism in the story. Biron’s love interest, Artemisia, is the consummate female lead in these pulp era science fiction stories. She is a bystander. She is a passive narrative voice. She has no active role. Today’s readers are a little more demanding of their heroines.

Asimov’s early works deliver for me just what I want them to: good stories that are well-paced and well told. Writers who cut their teeth on pulp magazines work hard to economize words and tell stories that move to economize on space. Asimov, like Bradbury, Matheson, Dick, and the other greats who emerged from this format, rank among the great story tellers and I love them!

Although it was the third written, The Stars, Like Dust is the first in the chronology of the Galactic Empire series that lies between Asimov's Robots series and Foundation series. It takes place centuries before the rise of Trantor as the rulers of the galaxy. The beauty of the Galactic Empire series is, it need not be read in chronological order by story or by publication date. The novels each stand on their own.