A century ago, a young, blind girl walks along a path near her home. Familiar with the path, she is comfortable and happy making her way near a sheer bluff. But soon come the other kids to tease and taunt her because she is blind. She panics and stumbles over the bluff to her death. In her plummet to the beach below, she swears revenge. 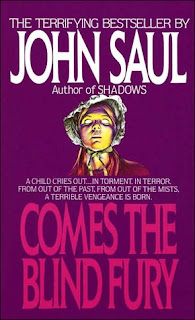 One hundred years later, Michelle Pendleton moves to Paradise Point from Boston. Eager to enjoy small town life and make new friends, Amanda welcomes the move. Her father, Dr. Cal Pendleton, is there to take over the practice of the aging town doctor.

While moving in, Michelle finds an old china doll in a closet. She names the doll Amanda. She soon learns from her new friends that a little girl named Amanda once lived in her house and died after falling from the bluff. Amanda’s grave is quite well known in the town as his her mother’s whose stone has quite the cryptic inscription.

Michelle’s mother soon gives birth to Michelle’s new sister and events turn for Michelle. She is adopted and becomes painfully aware that her parents now have a biological daughter of their own. One day, she is at a picnic on the beach with several friends when a girl starts teasing her about being adopted. Michelle runs away, but trips on the bluff and falls. She is badly injured.

After a while, her physical injuries heal, but she maintains that she needs a cane to walk. She starts dressing in all black. Soon, she is an outcast and the kids routinely make fun of her. She seems not to care. After all, she has a new friend in Amanda who comes to show her things.

Soon, kids around Paradise Cove begin dying. Those who torment Michelle seem to die in unfortunate accidents or are outright murdered. The only person present when these deaths occur is Michelle. Soon, the past and the present converge, brought about by a vengeful spirit and a vengeful human bent on visiting his family curse upon a man he feels wronged him.

This is John Saul’s fourth novel and he employs what became his standard format for many of his books. Child wronged a hundred years ago seeks revenge by employing a child of today. The characters and circumstances are different, but, with a few exceptions, the same trope applies. Nonetheless, Saul has a way of telling a good story employing this framework again and again.

The story is much tighter than Saul’s earlier works. The evil is defined. The reason the past is important is part of the mystery that is brought nicely to fruition. The main character is two parts sympathetic, one part slacker. Saul did leave us with a taste of ambiguity that worked for the story. Did Michelle kill because she wanted to? Or did Amanda’s lust for revenge drive her to it.

All the usual Saul tropes are here. The weak, indecisive father. The ancient evil bent on revenge. The wife who has no idea what is going on around her. The small town cop who is friends with the family around which all the evil is transpiring. One could complain that Saul tells the same tale over and over again. Perhaps, but many great books are retellings of older books. Saul uses the same devices over and over again to tell decent stories. This is never going to earn him a spot in the pantheon of great horror writers who weave a different tale every time. But that does not make him any less fun to read and sometimes, it’s good to have fun while reading.

Posted by Brian Schwartz at 7:17 PM