By 1963, Richard Matheson was an established novelist and screen and teleplay writer. He’d written for numerous television shows – most notably, The Twilight Zone. He’d adapted several Edgar Allan Poe works for American International Films, and he’d adapted one of his early novels, The Shrinking Man, into a screenplay retitled The Incredible Shrinking Man. In his second effort to adapt his own work, he apparently was not pleased with the result. 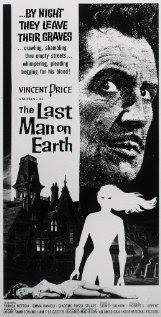 The Last Man On Earth closely parallels the Matheson novel. The main character is renamed Robert Morgan instead of Robert Neville. The movie opens with Morgan going through his daily rituals with Vincent Price (who plays Robert Morgan) providing voiceover narration.

In the movie version of Matheson's story, Morgan is a scientist who works with his friend, Ben Cortman at a laboratory that is searching for a cure to a pandemic that originated in Europe and is working its way to the United States. The disease turns ordinary people into vampires.

The film version fleshes out much more backstory on Morgan and his relationship with Ben Cortman than does the novel. In his novel, Matheson tells us that he and Cortman worked together and carpooled. He never describes them as friends. In the movie, they are close friends and neighbors.

The movie flashes back to the struggle to find a cure as the plague progresses. One day, Morgan comes home from work and sees a military truck loading a body from his neighbor’s house. As the plague progresses, the government goes from burning dead bodies to burning those infected but still alive.

Morgan’s daughter contracts the disease. Although he is supposed to report it, he does not, hoping against hope that he will develop a cure. His wife, desperate to relieve her daughter’s suffering, calls a doctor who reports the illness. Morgan arrives home just in time to see the truck carting away his sick daughter. He travels to the local burning pit in a vain effort to stop his daughter from being incinerated.

As in the novel, his wife becomes ill and eventually dies. He buries her and she comes back to him as a vampire. He kills her.

Most of the story elements from the book are included in the movie. He visits his daughter’s tomb and stays beyond dark. In the book, it’s because he’s dragged a zombie out into the sunlight and is conducting a study of its death. In the book he falls asleep until after dark. He races home, evades the zombies, but finds his car destroyed the next morning.

He also spots the dog. The movie encounter with the dog is reduced to just him chasing it and it returning the next day wounded and infected.

Where the movie takes a dramatic turn from the novel is near the end with the arrival of Ruth. Just as in the novel, he spots Ruth walking in a field and chases her down. He brings her back to the apartment and subjects her to the garlic test. He determines she is infected.

She discloses there that she is part of a group that has discovered a medicine that reduces the effect of the disease and allows them to move about in the daylight. Being a scientist, Morgan has an idea. He injects her with his blood which contains antibodies. Ruth is cured. She panics because she knows there is a group on its way to kill him. He is legend among her people for stalking by day, killing the innocent.

Ruth’s people arrive and break down the door. She pleads with them to stop, telling them he has found a cure. But the vampires give chase. He flees and ends up in a church. The vampires arrive in an assortment of miltary vehicles and corner him in the chapel. As Ruth looks on, they spear him with an iron fence post. He dies as Ruth looks on crying.

The entire community has gathered in the church to witness the execution. Ruth walks slowly back from the alter and sees a little girl crying. She walks over to the little girl and tells her to stop crying, there is nothing to fear anymore.

Of the movies based on I Am Legend, this is my favorite. Most movie fans tend to favor The Omega Man. I like it because it stays close to Matheson’s original story. However, it is hurt by poor production values. The film is shot in black and white which by 1964 screamed, “low budget.” It was filmed in Italy with a mostly Italian cast which required dubbing of dialogue.

While some of Price's narration whilst going about his lonely, daily routine was a bit hokey, the film captured Matheson's subtext of the pain of loneliness and the isolation of being the last of his kind in a world dominated by a new race of being. The Omega Man was much more action oriented with shootouts and car chases. I Am Legend was a medical thriller.

Matheson pulled his name from the film credits. According to Matheson, in an interview with Cemetery Dance Magazine, he felt that the movie was not well directed and that Vincent Price was not the best actor to play Robert Morgan.

The vampires in the movie more closely resemble zombies than vampires and I think it was probably this adaptation that created the zombie image in George Romero’s mind when he conceived Night of the Living Dead. In the book, some of the vampires are slow and stupid and often fall prey to the stronger, faster vampires. In the movie, they are all slow and dimwitted.

I saw this movie as a child and it made a strong impression on me – so strong that I made the effort to see it whenever it was rerun on television and eventually taping it to watch over and over again.

It apparently was not a success upon its initial release in 1964, but its reputation has grown. I think this is mostly due to Matheson’s rise in stature. More people have read the novel and appreciate the emotional depth of the story that may have got lost in the dubbing of dialogue and poor filming.