I Am Legend By Richard Matheson

I Am Legend
By Richard Matheson
Copyright 1954

In his 1954 novel, I Am Legend, young novelist, short story writer, and screenwriter, Richard Matheson, redefined the vampire for modern audiences. His book, I Am Legend, provided some scientific explanation of the vampire phenomena and some spiritual insight as well. As much has he did to redefine the vampire, his novel was more a subtext for the human condition of isolation than it was a raucous tale of battling the undead. 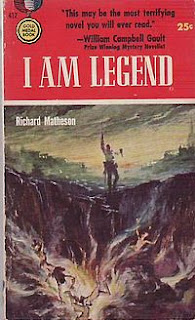 Robert Neville lives alone in a world dominated by vampires. He is the last true man on earth with the rest of the population either dead or undead.

At night, he listens to music powered by his generator in his garage, drinks, and listens to the vampire that used to be his coworker, Ben Cortman, call out to him, demanding he leave his house.

After two years of fearless vampire killing by day and drinking himself into oblivion at night, Neville decides to try to ascertain the cause of the disease and a possible cure. Neville suspects it’s an airborne pathogen and starts studying on the subject.

He learns a great deal about the biology of bacteria, blood, and how the two interact in the human body. He believes he’s isolated the bacterium that causes vampirism. He cannot figure out why vampires are repulsed by garlic, crucifixes, and mirrors. He theorizes that he is alive because, years before, he was bitten by a vampire bat that was infected and passed the antibodies along to him. As he ponders this, he grows frustrated trying to isolate all of the variables and gives up.

We flash back to Neville’s life before the plague. He had a wife and daughter. He worked in a factory and carpooled with Ben Cortman. His daughter died early in the plague. His wife caught it later. He tried desperately to keep her alive, but she, like everyone who got the plague, died. Instead of taking her body to one of the open pits where the government burned bodies to reduce the spread of the plague, he took his wife to a remote location and buried her. She showed up at his house a few days later as a vampire. He has to kill her.

One day while cleaning up after the undead in his front yard, he spots a dog out in the daylight. This is the first living creature he’s seen in more than two years. He first chases the dog, but loses it. He then begins to place daily offerings of food, milk, and water at his door to entice the dog. But before he can befriend it, it is infected and dies. Neville is devastated.

About a year later, Neville is wandering about the city when he spots a lone woman in a field, standing there in broad daylight. He chases her and eventually catches her. He takes her back to his house where he starts to question her.

Ruth says that she and her husband lived together in a fortified home in a nearby town. Since vampires got her husband recently, she’s been on her own. Despite her claims of having been victimized by vampires, she questions Neville on why he needs to kill them. She is intrigued by his studies of the vampire blood.

Neville had deduced that the stake through the heart is not necessary. Any wound that is not allowed to close will cause a vampire to die. Chemicals in garlic, when inhaled, cause pain in the vampire when the chemicals react with the virus. They can’t stand mirrors because they can’t stand the sight of themselves. Ruth listens attentively as he reveals all this.

Neville become suspicious and dares her to sample some garlic. She is repulsed by it. She says she’s sick of the smell, but is not affected by it. Driven by his desire for human contact, Neville dismisses his own doubts.

One night, Neville awakens to find Ruth fully dressed and evidently preparing to leave. Neville challenges her to submit a sample of her blood. She does so reluctantly. But as Neville is examining it, she knocks him unconscious and flees.

When Neville awakens, he finds Ruth gone and a note left behind. She tells him that she is a vampire and part of a large group of intelligent, civilized vampires that are trying to rebuild society. She was sent to spy on him. Neville has killed many of their group in his daily outings – including her husband. She warns him that the vampires will be coming for him and that they want to kill him. She urges him to flee.

Neville is tired of his life and tired of being alone. He no longer values his life and decides not to flee. He decides to live out his days in his home as the vampires rage about outside at night.

Several months later, Ruth’s prediction comes to fruition. Vampires with obvious intelligence and cunning come to Neville’s house. They rush in, beat him up and abduct him. He awakens in a prison. He lies in bed, unable to move because of the injuries he received in the beating. Ruth comes to him and tells him that he is to die by hanging. She says that there are hundreds of vampires assembled outside, awaiting his execution with great anticipation. Neville surmises that she is, in fact, their leader.

Neville resigns himself to his fate, even welcomes it. He tells Ruth to make sure that the new civilization is civilized and that they treat each other with kindness. Ruth responds with an act of kindness. She gives Neville some pills that will make his execution easier for him to endure.

The book ends with Neville coming to the realization that he is the last of his race and that a new race, the race of vampire, will now dominate the earth. Once upon a time, vampires were legends. With his passing, he, the human man, is legend.

Matheson doesn’t tell a lot of story in his short novel. There’s enough story and a strong enough story to make it compelling reading. But the subtext is loneliness. More than a raging vampire killer, Robert Neville is a lonely man who first rages against the cause of his loneliness, then tries to find a cause and solution to his problem before he passes into legend.

The book is one of the finest horror novels ever written and ranks among the most influential. It is revered by great writers like Stephen King and great movie makers like George Romero who used it as a blueprint for his groundbreaking independent movie, Night of the Living Dead. Its influence can be seen in King’s work in ‘Salem’s Lot, Robert R. McCammon’s They Thirst, and Dan Simmons’ Children of the Night.

It has been called the first modern vampire novel. But there is some debate as to whether it was really a vampire novel or a zombie novel. It adheres to the vampire archetypes with the garlic, the crucifix, the mirror, and the need for blood. But vampires have generally been held as intelligent, cunning creatures of evil. Matheson revised them. He created two different degrees of vampire. Neville notes that many are mindless, unintelligent plodders. Others, he notes, act with a degree of intelligence.

Those plodding, mindless vampires became the archetype for the modern zombie which has seen an incredible resurgence in the last five years with dozens of zombie movies and even a zombie television series in AMC network’s The Walking Dead. All of these modern zombie stories can be traced back to Matheson’s revision of the vampire archetype.

This is Matheson’s most noted and best known work, but certainly not his best. It is short which I usually appreciate. But I thought there was room for more backstory on Neville and the development of the plague. There was also room for more plot. With those shortcomings noted, it was still one hell of a book and is required reading of any fan of horror.

Four movies have been made based on the novel. The first was The Last Man On Earth in 1964. Matheson wrote the screenplay under the penname Logan Swanson and it starred Vincent Price. In 1971, it was heavily revised for the movie, The Omega Man, starring Charlton Heston which contains allusions to the rise of the counter culture of the 1960s as well as the power of the blood of Christ. In 2007, it underwent heavy revision to give it a medical thriller flavor in a movie called I Am Legend starring Will Smith. There was a fourth, direct to video release called I Am Omega which I have not seen.

Richard Matheson’s influence over the horror genre is difficult to overstate. While there are many examples, one need not look any further than I Am Legend to appreciate that influence.

Posted by Brian Schwartz at 3:01 AM

Labels: I Am Legend, Richard Matheson