Coffey On the Mile: Book Six of The Green Mile By Stephen King

Coffey On the Mile: Book Six of The Green Mile
By Stephen King
Copyright 1996

Paul awakens in the TV room at Georgia Pines, having fallen asleep while writing the adventures of the guards of Cold Mountain Prison’s death row the night they took a condemned man to suck the death out the warden’s wife. He is stretching the kinks out of his back and neck when he is approached by his nemisis, Brad Dolan. 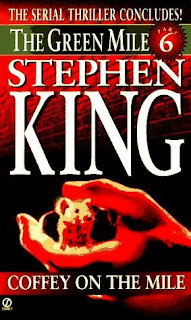 Dolan wants to read what Paul has been writing. Paul tries his best to hold onto his manuscript, but he’s an old man and Dolan is young and spry. Dolan is just about to wrest the papers from Paul’s grip when Elaine walks in and yells at him to stop.

Dolan gets mouthy with her and Elaine informs Brad that her grandson is Speaker of the Georgia House of Representatives and her grandson loves his grandmother. That grandson might be inclined to see to the dismissal of the orderly who mistreated his grandmother and her friends at a state run nursing facility.

Dolan walks off sulking. Paul is struck by the irony that after enduring Percy’s taunts of having a high ranking official on his side, the man who most reminds him of Percy is undone by the same.

Paul gives Elaine what he has written so far and asks her to read it. He then sets out to finish his tale.

The guards have returned to the Mile. All is as they left it. Paul reminds us, as he told us in his last installment, the night was far from over. There was still Percy to deal with.

They take the tape off of Percy’s mouth and talk to him. They remind him of their promise. They tell him that if he talks about what happened, they will hurt him. They’re prison guards and they know people who love to hurt prison guards like Percy. Percy promises to be good. He tells them he’s going home.

They release him from the straight jacket and he walks down the Mile. As he walks by John Coffey’s cell, Coffey reaches out and grabs him. Paul is stunned because he never thought Coffey a dangerous man. Just as he kissed deeply Melinda Moores, he lays one hard on Percy’s lips.

Percy staggers away from the encounter. Paul approaches Percy and sees the man is not aware of anything. Paul and the other guards try to snap Percy out of his fugue, but he’s not there. Whatever was in Melinda Moores’ head is now in Percy’s, Paul surmises.

Percy is shipped off to a mental hospital, never to speak again. Wharton goes to the prison cemetery. An inquest is held and investigators attribute it to Percy being insane after the horrific death of Eduard Delacroix.

Coffey, with the slightest of touches, gifts Paul with more insight into what happened to the Detterick twins, of whom Coffey was convicted of murdering. To check what he thinks he knows, Paul travels to the county where the murders occurred and talks to one of the deputies who investigated the murders. The deputy reports back his findings and what was imparted to Paul was confirmed.

The men of the Green Mile once again convene at Paul’s kitchen table. He tells them how the Detterick twins were murdered. Mr. Detterick hired an itinerant laborer to paint his barn. That itinerant was none other than William Wharton. Wharton didn’t stay at the house, but he took dinner with the family over the three days it took to paint the barn. One night, Wharton returned and took the twin girls off the front porch where they were sleeping.

The guards have a real moral dilemma on their hands now. Not only are they about to kill and honest miracle worker, but they are about to knowingly execute an innocent man. Paul’s wife pleads with them to do something to halt the execution, but Paul and his men know the ugly truth. It’s the 1930s. It’s the South. John Coffey is a black man. Innocent black men often die for crimes they did not commit.

The day comes for Coffey to walk the Green Mile. Before he goes, he solves on final mystery for Paul. Paul has wondered how William Wharton got the girls off the porch without them screaming. Coffey explains that he told the girls, if one of you screams, the other dies. He killed them with their love, he tells Paul. It’s that way all over the world, he says. And for that reason, he’s perfectly at peace with the idea of dying.

Paul and John pray together before entering the execution chamber. Coffey is escorted in and strapped down. Mrs. Detterick shouts her hatred at Coffey over and over again. The pain of the hatred distresses John. He asks that the hood not be placed over his head. He’s afraid of the dark. Paul complies and then orders the current. He looks into Coffey’s eyes as he is electrocuted and watches awareness pass from them.

We learned earlier that it was Paul’s last execution and that he transferred to another prison after that. Elaine returns as Paul is wrapping up and wants to read the last. He gives it to her and she takes it in. Finally, something dawns on her. Paul had two grown children in 1932 when John Coffey was on death row. That would make him very old. Paul tells Elaine that he is, in fact, 104. That when Coffey touched him that last time, he passed on something to Paul that has extended his life. He then tells Elaine that he wants to show her the secret of his morning walks.

He takes her to the utility shed and pulls out a cigar box. In that cigar box is a decrepit mouse, once white, but now old and gray. It’s Mr. Jingles. Like Paul, Mr. Jingles was gifted by John Coffey with life everlasting. He found Paul at the rest home after all these years and Paul has been caring for him.

As they are discussing this, they are surprised by Brad Dolan who has been lurking to find out Paul’s secret. He concludes its nothing more than a geriatric love nest and decides to leave. Before he does, he points out that the mouse is dead. Paul turns to look and Mr. Jingles has indeed passed on. Paul now knows he, too, will mercifully die someday.

Elaine asks him whatever happened to his wife. Paul promises to tell her another day. It’s too painful to go into that day. But Elaine has a heart attack in her sleep just a few weeks later and never gets to hear how Jan Edgecomb met her end.

Paul wraps up his exposition by telling us how each of his friends died. Some in accidents; some of natural causes. His wife, however, died tragically. On a bus trip to see their granddaughter graduate from college, the bus in which they are traveling blows a tire on a rain slicked road and crashes. All but four are killed. Paul holds Jan as she dies, her skull crushed. As she passes, he thinks he sees John Coffey lurking in the shadows. He screams for help. He screams for John Coffey to return and save his wife. All around him is death.

Paul lies awake at night, thinking back on the events of 1932, now knowing he will die someday.

King wraps up by discussing the serialization process, saying he’ll never do it again, but found doing it fulfilling. He wrote it at a feverish pace, and having written quickly, without the benefit of doing thorough historical research, may have made some errors with his history.

He says that if he ever publishes The Green Mile as one volume (he eventually did) he may leave the mistakes in (he did not)because many great works contain these small errors of fact or continuity.

After having endured King’s five previous novels, I looked to The Green Mile with a great deal of skepticism. The last five had been novels thinly masking social commentary on feminism. I figured King’s constant reader was about to endure the man’s thoughts on capital punishment. I was so blissfully wrong.

What we got instead was perhaps King’s most socially significant work – perhaps his own thoughts on the place of Jesus Christ in a society that tortures and kills its own with what passes for love.

The theology of the novel has been explored in many forums. The significance of John Coffey has the initials J.C. as in Jesus Christ. Paul, the storyteller, etc. I am no theologian and do not have the academic or intellectual credentials to evaluate it on that level.

I can say that it is the most uplifting of the King works. King has explored Christianity before. We saw it in ‘Salem’s Lot with the priest, Father Callahan who has lost his faith. We saw it in The Stand where an agent of God gathered her flock to challenge an agent of the Devil. It was also explored in the issue of abortion in Insomnia.

But King’s view of God in those books was always the God of the Old Testament. The God who demanded sacrifice. The God who punished. The God who meted out justice untempered by mercy. For the first time, in The Green Mile, King examines Christ and what might happen to Christ were he to appear before us today.

One of the earlier questions dealt with the dream Paul had. That dream was of him and his fellow guards standing on Cavalry with John Coffey on the Cross. Like Pontius Pilate, when it came time to sign Coffey’s death warrant, he washed his hands and passed the duty to one of his subordinates. I’m sure those more learned in the gospels could find other similarities.

In King’s canon, The Green Mile ranks near the top. What sets it apart is that it is an entirely plot driven story with a great deal of subtext. Characters are adequately developed, but we are not given extensive backstories.

The plot is compelling. The reader is hoping against hope that there will be justice and mercy for John Coffey, knowing that the time and place will not allow for it. King builds his climax wonderfully as Paul must participate in the murder of one of God’s greatest gifts.

Posted by Brian Schwartz at 1:27 AM

Labels: Coffey on the Mile, Stephen King, The Green Mile