Book to Movie: Quicksilver Highway (1997)
Teleplay by Mick Garris
Directed by Mick Garris
Based on the short story Chattery Teeth by Stephen King and The Body Politic by Clive Barker

A lot of Stephen King fans loath Mikc Garris. They point to his work on Riding the Bullet and Desperation as just how bad a poor director can mess up a good story. I disagree with most King fans on the quality of Garris’s work. I think he takes some average tales and makes them better. 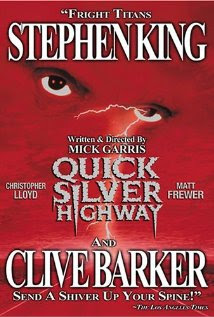 Unfortunately, that wasn’t the case with Quicksilver Highway. He took two average tales – one by King and one by Clive Barker – and makes average vignettes out of them.

The movie opens with a newlywed couple stranded along a rural highway. The groom takes off to look for a spare tire, leaving the bride behind to wait. It grows dark and the lady is getting scared. That’s when Aaron Quicksilver (Christopher Lloyd) arrives on the scene in a Rolls Royce towing a large Airstream trailer.

Quicksilver invites the young bride into his trailer to wait out her boyfriends disappearance in safety and comfort. The trailer is actually a richly appointed suite with fresh fruit and liquor. Once he has her inside, Quicksilver – a tale teller by trade – tells her the tale of the Chattery Teeth.

The script for Chattery Teeth stays very close to King’s vision of it. A traveling salesman purchases the pair of metal, mechanical chattery teeth which walk on little feet for his son. The contraption is supposedly broken.

He hits the road and picks up a hitchhiker who tries to rob him and steal his car. There is an accident during the struggle and the van lands on its top. The salesman is trapped in his seatbelt while the hitchhiker is preparing to carve him up. The chattery teeth come to live, taking down the hitchhiker then dragging him off into the woods.

Terrified of the tale, the bride bursts out of the trailer to see a pair of chattery teeth dragging her new husband off into the desert brush.

The second vignette opens with a professional pickpocket making his way through a carnival crowd, taking what he can lay his hands on. He stumbles across Quicksilver’s tent which promises macabre exhibits. He goes in.

Aaron Quicksilver is there, standing before a candle resembling a human hand. He proceeds to tell the thief so nimble with his hands a story about another man, who plied his trade with his hands until they betrayed him. The Body Politic opens.

Garris alters Barker’s story quite a bit. He makes the man with the traitor hands into a plastic surgeon who starts out by inexplicably dropping instruments and making errant cuts. It progresses from there to strangling his girlfriend.

As in the story, the hands have their dialogue while he sleeps. Right promises to cut off left, to liberate him so that he can raise an army of hands to take over the bodies of the world. The surgeon watches while his arms and hands, completely independent of him, cut off his left hand. The hand makes its escape as police and emergency personnel arrive at the house.

The surgeon is transported to the hospital and is placed in a room under sedation. The hand follows him and pretty soon, hospital patients and personnel all lose control of their hands which rebel and “free” themselves. The hospital is soon crawling with hands with murderous intent.

The surgeon takes off, proclaiming himself messiah. The hands all follow. He climbs to the roof and jumps to his death. All of the hands follow him blindly to his death.

Aaron Quicksilver wraps up his story, telling the pickpocket that there is no moral to the story. It’s just a story. The pickpocket finds that his hands have had enough and act on their own to get him captured by police.

Quicksilver Highway was entertaining television fare. It was awfully light on horror and left a lot of potential material on the table.

First, one has to wonder why Garris chose these two stories. Neither story is particularly great, but neither is bad. Both stories require a huge suspension of belief to work which make them bad candidates for screen adaptation. Both stories also contain an element of camp, and this is what is left on the table.

With Christopher Lloyd acting as the host, dressed in campy costumes and makeup, one assumes early on that this is going to be a campy take on two campy stories. My first impression was that this was going to be a television riff on Creepshow. I was disappointed.

Garris took his movie and the stories upon which they were based entirely too seriously. Both stories lent themselves so well to dark camp, but Garris goes for the straight scare. It doesn’t work because neither story is scary. Christopher Lloyd’s talent (as well as his excellent costume and his stateroom on wheels) are wasted.

There have been much worse adaptations of both authors’ works. Garris has done worse movies (Desperation comes immediately to mind). Quicksilver Highway was an entertaining movie to watch. But one cannot help but wonder how much better it could have been if Garris had taken his movie an entirely different direction, fully utilizing the talents of Christopher Lloyd.

Posted by Brian Schwartz at 1:34 PM