Richard Matheson had published several short stories, a couple books, and written two teleplays for early television by 1957. His screenplay based on his short novel was his first venture into that medium and may stand as his best effort on the big screen. 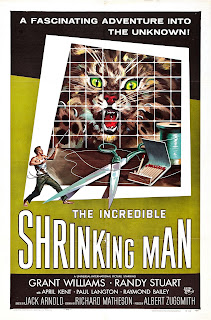 Matheson did not venture far from his original story when adapting The Shrinking Man to the big screen. He adapted the fractured narrative into a linear one to make the story work better.

The movie opens very much as the book did with Scott Carey (Grant Williams) exposed to the strange mist while out on the boat. A few months later, he notices his clothes are getting bigger and finally he is given the diagnosis that he is shrinking due to exposure to radioactive insecticide.

Stricken from the narrative was the babysitter and Scott’s lust for her as well as his lust for the tiny woman at the freak show. Instead of satisfying his lust, as she did in the book, she serves as an affirmation that he is not a small man. However, having earlier been told that his shrinking had been arrested, it is pointed out by tiny Clarice (April Kent) that he is shrinking again.

The bitterness Scott has toward his wife, Louise (Randy Stuart) is present in both the book and the movie, but is much more subdued in the movie. He is not unfaithful to her and rues his sometimes cruel treatment of her.

The first half of the movie is Scott and Louise (no daughter in the movie) dealing with doctors and the public as Scott shrinks. The second half is Grant Williams putting on a one man show as Scott fights to survive in the cellar. In the novel, the spider was Scott’s arch enemy. The spider makes an appearance in the movie, but the scene with the cat figures much more prominently. The cat is featured in many early shots in the movie, foreshadowing the menace.

Willams’ provides voiceover through the entire picture to move along the story and it is well written and delivered, if perhaps a bit cheap. But, given that this was his first screenplay, one can cut Matheson a little slack. However, as Scott is going to meet his final reward, Matheson’s script and Williams’ delivery of the voiceover is beautiful and serves as great closure.

The Incredible Shrinking Man is a highly regarded film and rightfully so. It is a well written, well directed, and well acted film. But the special effects really make the film. Sets with giant furniture were built. Giant match boxes, giant needles, and giant crumbs all appear realistic. Grant Williams’ appearance in front of the blue screen and the rendering on film were superb for the time.

This film really launched Matheson as a Hollywood talent. In just a couple years, he would make a name for himself in the television genre with The Twilight Zone, working with Rod Serling, Charles Beaumont, and other great screenwriters. He would go on to write screenplays for his own novel, I Am Legend (retitled The Last Man on Earth), and several others. His work with American International Pictures, adapting Poe tales for director Roger Corman and actor Vincent Price was a high point for the horror movie genre in the 1960s.

The Incredible Shrinking Man won the Hugo Award for Best Dramatic Presentation in 1958 and in 2009, was added to the National Film Registry for preservation as a historically significant film.

Some of The Incredible Shrinking Man’s special effects do not stand the test of time as well as Claymation and other effects of the time. But the script is strong and the movie is well made, making it a pleasure to watch today.

Posted by Brian Schwartz at 1:51 PM