The Shrinking Man By Richard Matheson 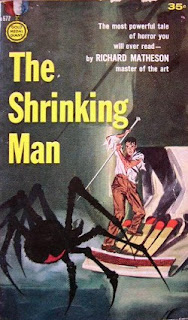 Scott Carey is out on his brother’s boat one afternoon when he is exposed to a cloud of radiated pesticide. Shortly thereafter, he notices he’s shrinking. He’s losing weight and, more alarmingly, he’s growing shorter by 1/7 of an inch every day.

At first, his shrinking size is an irritant, having to buy new clothes. But soon he becomes alarmed and goes for medical testing. After an intolerably long battery of inconclusive tests, Carey gives up and goes home.

He soon loses his job as he becomes shorter and shorter. He sells his story to a tabloid to make money, and soon finds himself the subject of unwanted attention. Eventually, he relocates to a new community with his wife and daughter to a new community and Scott stays out of sight.

He becomes smaller and smaller. One night, while he’s just 18 inches tall, he and his family stop by a carnival so his daughter can ride the rides. Scott agrees to stay in the car, but slips out after his wife and daughter head for the carnival. He goes to the carnival and finds a sideshow freak who is an 18 inch tall woman.

Scott is immediately taken with lust for the woman and she reciprocates. But she is to perform in just a few minutes. She leaves to perform and Scott returns to his car to find his wife. There, he begs her to be allowed to spend one night with the short lady to release his pent up sexual frustration. His wife agrees.

One fateful afternoon, his six year old daughter treats him like a doll and injures him. His wife is forced to purchase a doll house for him to live in to protect him from his daughter. There, he lives in a house fitted with fake furniture and fake appliances, cutoff from the outside world.

One evening, Scott is outside his doll house and the cat notices him. Just a few inches tall, he looks like a fine toy or meal to the cat. He is standing off with the cat when his family opens the door to enter the house. Scott is swept outside by the wind and manages to get to the cellar where he finds new vistas of adventure.

The story is told in a fractured timeline. The story opens with Scott being exposed to the pesticide. In the next chapter, he is in the cellar doing battle with a black widow spider, using a needle to defend himself. The time in the cellar is present tense. As he moves about the cellar, trying to survive, he recalls his shrinking. This is past tense. These parts of the story are headed by his height at the time.

As I noted, Scott Carey is very much an anti-hero. He’s bitter, angry, and mean. He treats his wife horribly as he becomes distant to her. He misses intimate contact more than he misses any emotional bonding. He lusts after the teenage babysitter and devolves into a peeping Tom, sneaking peeks at her in the shower when he’s supposed to be out of sight in the cellar. He lusts after the carnival woman and even hurts his wife willingly to spend just one night with her.

The anti-hero works for this story and makes it much more interesting. The challenge of writing an anti-hero is to make the reader dislike him, yet root for him. Matheson accomplishes this. He disgusts the reader with his emotional shallowness, but the reader is rooting for him in his tribulations in the cellar.

The fractured narrative works as well. I enjoyed the interludes when Scott was recalling the events of his shrinking more than I did the action scenes where he’s overcoming the obstacles in the cellar. The big reveal isn’t as much Scott’s ultimate fate, but how he got into the cellar. The middle of the story comes near the end. When Scott’s final fate is reveals (and it is a really cool fate), two stories have ended at once.

It works, frankly, because the present tense story wasn’t nearly as interesting as the recollections. That’s probably not what Matheson was going for. But there’s a good chance I would have become bored with the second half of the story had he taken a more linear approach.

In his book, Danse Macabre, Stephen King recounts where Matheson got the idea for The Shrinking Man. He states that Matheson was watching a comedy film where a man was leaving a woman’s apartment in a huff. He grabs another man’s hat on the way out the door and it is entirely too large. Matheson thought to himself, what if that had been his own hat?

On the Wikipedia entry for the book, I saw an analysis sourced to a book titled, Rational Fears: American Horror in the 1950s. According to the analysis, the subtext of the book is the 1950s white male fear of loss of masculinity. Masculinity for the white male of the 1950s is linked to employment, fatherhood, domination over women, and sexual virility. As Scott shrunk, he lost these things. In the subtext, as he lost these things, he shrunk.

I don’t know if I buy that. Sometimes a story is just a story and this was a pretty good story.

Matheson adapted this novel into a screenplay. The Incredible Shrinking Man was the first Matheson novel to be adapted into a movie, adapted by Matheson himself. The script for the movie was Matheson’s first screenplay. He would go on to write many screenplays, many teleplays, and become one of the few authors who successfully crossed over and back and forth between books and visual media achieving excellence in both.

Matheson wrote better books than The Shrinking Man. But for an early work, Matheson shows the flashes of brilliance that would make him one of the most prolific and most recognized writers of our time.

Posted by Brian Schwartz at 5:13 PM