Suffer the Children By John Saul

A hundred years ago, in Port Arbello, Maine, an ugly and unspeakable crime happens. A little girl is raped and murdered by her father. Her body is never found. After committing the ghastly deed, the father promptly commits suicide. This is the curse of the Congers. 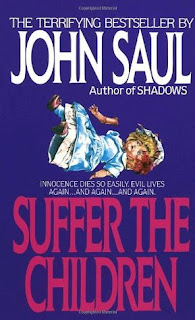 One hundred years later, the Congers still reside in the same home in Port Arbello, with nearby woods and a cliff falling to the ocean below. The old family fortune is dried up and Jack Conger publishes the town newspaper while his wife, Rose, sells real estate.

Jack Conger has committed his own crime. He does not remember the details, but the results are apparent. One day, a year before, he came out of the woods carrying the unconscious body of his younger daughter, Sarah. Since that day he attacked – but did not rape – Sarah, she has not spoken. She lives in her own world that only she understands.

The Conger’s older daughter, Elizabeth, is a well-adjusted 13 year old who is well behaved, does well in school, and takes very good care of her impaired sister.

There is tension in the Conger marriage as Jack’s crime has rendered him impotent – at least when it comes to his wife. Between their dysfunctional daughter – rendered so by Jack – and their marital problems, the Congers are always on edge with each other.

One night, a classmate of Elizabeth’s stumbles back into town, also unable or unwilling to speak. The local constabulary can find no evidence of an abduction or any other crime even though her father keeps pressing for a full investigation. Later, a second girl goes missing, lured to a remote cave by Elizabeth who is answering to another entity that has entered her head.

Elizabeth has been visiting a cave that is believed to only be legend. The cave is located along the cliff and is very hard to get to. There, she has found the skeleton of a young girl murdered 100 years before. The spirit of that girl speaks to Elizabeth through a Ouija board and takes control of her mind and body at night. She goes to the cave and stages tea parties with her captive, a dead cat, and the dead girl.

A third child, an eight year old boy, goes missing a few days later and the residents of Port Arbello are quite worried. The boy, like the girl, was lured to the cave by Elizabeth and forced to participate in the macabre ritual.

Meanwhile, young Sarah – who has been witness to many of Elizabeth’s crimes – is growing more agitated and acting out. Elizabeth’s activities go unnoticed as the Congers deal with their daughter, her school, and the school psychologist. Sarah becomes a suspect in the disappearances even though the police concede she is too small to have overpowered a teenage girl.

Events come to a head when a third kid goes missing. This time, it is the teenage son of the Congers’ new neighbors. Elizabeth eventually kills all of the kids she has imprisoned in the remote cave and manages to frame Sarah for the crimes when Sarah returns from the cave carrying a dismembered arm. Sarah is sent to a sanitarium while Elizabeth and her parents try to resume a somewhat normal life. The bodies of the missing kids are not found for many years until construction of apartments leads the sheriff to the remote cavern and the skeletal remains of four children.

Suffer the Children was John Saul’s first novel and sold more than a million copies. In the wake of the success of The Exorcist, books featuring young girls possessed or driven to evil took off in popularity. Witness the success of Audrey Rose and other titles like it. Saul’s manuscript was timely in its submission.

It also set a pattern for plotting that Saul would use over and over again throughout his career which has now apparently ended. He starts with a prologue taking place 100 years before where a child is either the victim of a crime or is the doer of a crime. Then that spirit is awakened and haunts or helps a child or children in the present. Not all his books are like this. But most follow this same format.

Suffer the Children succeeds on several levels. First and foremost, it is atmospheric. The remote, hidden cave and the ghastly scenes Elizabeth plays out are brilliantly written and absolutely creepy. The candle-lit macabre tea parties with Elizabeth’s rantings succeed in creeping out the reader.

The tension in the novel is well-developed. Saul usually develops his characters only to the point of making them interesting enough to the reader for the plot to work. There are no extensive backstories – al a Stephen King. But Saul goes above and beyond in developing his characters in Suffer the Children with Jack and Rose Conger. The tension in their marriage, their growing anxiety over Sarah’s increasingly bizarre behavior, their worry about the Conger curse, Jack’s affair with his secretary and their feelings of inadequacy as parents all serve to keep the tension high in Suffer the Children.

Saul falls short in what I believe to be an essential element of great horror: What was the nature of the evil? Although parts of the story are told from Elizabeth’s point of view, we are never really in her head. What drove her to do what she did? Was there an evil spirit, Beth, who contacted her through the Ouija board? Did finding the cave and the body of the dead girl lead to the possession? Or, was she just acting out the Conger curse because she had to be the perfect daughter in a home riddled with tension? Saul never lets us know exactly.

The actions and reactions of some of the characters are rather unbelievable. Why would Rose stay with and continue to love a man who inexplicably beat his daughter so badly that she was traumatized to the point of not talking? Why would Elizabeth, aware of her father’s crimes against her sister, continue to love and cherish a father who did that? Why would a chief of police continue a close friendship with that sort of person? None of that really makes sense, but is essential for Saul’s plot to work. A plot relying on implausible behavior is going to be weak.

Along that same point, nobody even has a private moral objection to Jack’s crime. Nobody privately thinks he is a drunken lout devoid of morality. Worse, people like his secretary and the chief of police tell him what he did wasn’t so bad because he didn’t rape her! If I knew someone like this, if I was force by business or decorum to be polite, I would. But my private feelings would be of loathing.

Why was Jack not arrested for his crime against his daughter? One might reason it was a different decade with different values, but I don’t buy it. Child abuse was child abuse in the 1970s. He got drunk and beat his daughter badly. He obviously did some serious harm to her psyche. It is clear that she was rape tested. Yet he is allowed to go on with his life like he was the perfect father. It just doesn’t work in real life or in fiction. It’s too implausible.

These shortcomings can all be explained by the fact that Saul was a young writer and this was his first novel. He got much better over the next several books with more believable character actions and reactions and more clearly defined evil. While Suffer the Children is not great horror, it is good horror carried by some excellent writing. It was good enough to establish John Saul as one of the top authors of horror fiction for four decades and worth the time spent reading.

Posted by Brian Schwartz at 1:10 AM