Book to Movie: Firestarter (1984)
Screenplay by Stanley Mann
Directed by Mark L. Lester
Based on the novel, Firestarter, by Stephen King

Stephen King had emerged as a bankable enitity in Hollywood by 1984. With Carrie, The Shining, Creepshow, The Dead Zone, and Cujo doing well at the box office, Hollywood went to Firestarter as an easy title to make into a movie. They recruited an all star cast that included Drew Barrymore, Martin Sheen, George C. Scott, Heather Locklear, and Art Carney. A movie with that kind of billing ought to be good, but it wasn’t.

Seldom does a Stephen King story get such a straight conversion from a movie to book. Watching Firestarter, with just a few exceptions, is exactly like reading the book, except the characters aren’t nearly as deep and the plot is even more boring than in print. 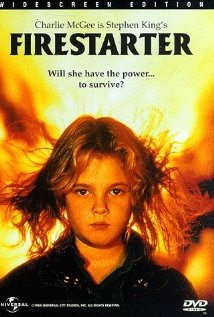 The movie opens with the frantic scene of Andy and Charlie rushing through the streets of New York just as in the book. They get to the airport and Andy has his flashback scene to when he and Vicki met. It plays out just as in the book except the confrontation with the Shop agents is at Charlie’s friend’s house instead of at an Ohio Turnpike rest area.

They travel to the Manders’ farm where Charlie torches the agents and their cars and then head for Andy’s grandfather’s cabin. They travel into town and mail their letters. Rainbird and another agent kill the mailman (as opposed to just intimidating him) and steal the letters. They then go to the cabin where they take Andy and Charlie.

It then progresses through the dull middle part of the book with Rainbird’s manipulations and Andy scheming to get out. Andy gets Cap alone on the Shop grounds and convinces him to take Andy along on the trip to Maui.

All references to ricochet and echo as it relates to Andy’s Push are eliminated. Also eliminated is the character of Andy’s doctor and his suicide which was rather extraneous in the book anyway.

What is fundamentally different in the movie is the climax. Andy has arranged to meet Charlie at the horse barn. She tells her buddy Rainbird about it and Rainbird knows he has to kill her now. He goes to the barn ahead of time and lays in wait in the loft.

Cap brings Andy to the barn and an Shop agent brings Charlie. They have a tearful reunion and Charlie tells her dad that her buddy, John Rainbird is there too. Andy has learned that Rainbird was the agent that manipulated Charlie and tells her. She is hearbroken. Andy tells Cap to kill Rainbird, but Rainbird puts a bullet in Cap’s brain first.

Just as in the book, Rainbird is momentarily distracted while shooting Cap and Andy pushes him and makes him jump. Once on the floor, he shoots Andy. He tries to shoot Charlie, but Charlie incinerates the bullet and sets Rainbird on fire.

Andy is near death and tells Charlie that she must burn it all and then tell their story. He dies and Charlie starts her rampage.

In the book, she set all the Shop buildings on fire, but allowed people to escape. In the movie, she launches fireballs, killing agents who are shooting at her and pretty much everybody else she sees. This is contrary to King’s development of Charlie who did not want to kill even when angry. While the scene was a special effects blockbuster of explosions, fire, and men running around on fire, it destroyed Charlie’s character.

The screenwriter and director were much quicker to get to the end of the story than was King. Charlie hitches a ride to the Manders’ farm where she is welcomed. After a tearful reunion, Irv takes her to the New York Times. The movie ends with them standing outside the building, getting ready to go in.

The book was dull, which made for a dull movie. The cast seemed on autopilot. There was nothing menacing about Rainbird. The tension between him and Cap wasn’t there at all, even though it was alluded to in the dialogue. They didn’t even invest in making Rainbird a hideously scarred person. He was just an American Indian with a clouded eye.

Drew Barrymore did what she could with the role of Charlie, but the crying and screaming weren’t convincing. Of all the cast, David Keith probably did the most with his role as Andy.

A lot of garbage has been made bearing Stephen King’s moniker, and Firestarter is far above tripe such as The Mangler and Graveyard Shift. That’s not saying a lot, however. It certainly ranks below great movies or even good television miniseries. If you’re a Stephen King fan, the movie is a must see. Otherwise, you’re not missing much.

Posted by Brian Schwartz at 1:09 AM