The adventures of Matthew Corbett continue in the third installment in Robert McCammon’s remarkable and thoroughly enjoyable series. Instead of solving mysteries, Matthew is hired security to escort a mass murderer to justice. 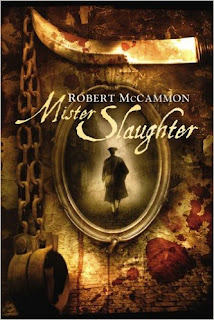 In the wake of his adventures in The Queen of Bedlam, Matthew is basking in his new found celebrity. He’s the toast of the town for unmasking The Masker. He dresses like a dandy and likes to be seen in New York’s trendiest taverns. But his budget is suffering for it.

A chance find of lots of cash would seem to be the answer to Matthew’s budgetary woes. Before he can put the money to work, however, he and Hudson Greathouse are hired and dispatched to the Bedlam Asylum to pick up Tyranthus Slaughter – a mass killer in London and a notorious highwayman in the New World. They are to escort him to New York where he will be shipped to London to meet justice and the hangman.

Slaughter proves to be the most diabolical being Matthew has ever encountered. He kills without compunction or motive on his way to meet his employer – an agent for the notorious Professor Fell who has placed a death mark on Corbett and Greathouse. Matthew is riddled with guilt as he and Walker In Two Worlds track Slaughter across the countryside in a game of cat and mouse. The bodies pile up and Matthew knows that, had he divulged his acquisition of wealth to Greathouse before Slaughter led them astray, these deaths would have been avoided.

Matthew finally catches up to Slaughter at a remote hog farm, renown for their fantastic sausage. There, he learns a great deal about the enigmatic Professor Fell. Before he can catch Slaughter, however, he escapes and sets out to carry out another murder assignment. The target is someone very close to Matthew.

Matthew pursues him and the two meet. When the chips are down, Matthew finds an unlikely ally and Slaughter meets his end. He returns to the Indian reservation to find Greathouse nearly healed and ready to return to New York.

In earlier reviews of Speaks the Nightbird and The Queen of Bedlam, I professed and indifference to mystery stories, but my enjoyment of those two novels which were indeed complex mysteries. This book was a cat and mouse chase story. I normally revel in chase stories like Mine and Gone South by McCammon. However, I did not enjoy this book as much as I did the earlier works.

This is not to say I didn’t enjoy the reading. McCammon has me hooked on Matthew Corbett. The deliciously morbid twist near the end was delightful. McCammon’s characters were as interesting as ever. The book suffered no major defect and is beloved by Corbett fans and fans of McCammon.

I didn’t find this chase story as compelling reading as the mysteries. All in all, the events in the chase were pretty predictable except for the aforementioned twist. Matthew’s mysterious ally was obvious. The fight scenes were pedestrian. I like Matthew more for his wits than his brawn.

This was also, by far, the shortest of the Matthew Corbett novels. It was not the immersive experience the two prior books were. I love a long, deep novel with rich characters, interweaved subplots, and compelling action. Of course, Corbett and Greathouse are already developed by the earlier novels and McCammon does a fine job with Walker In Two Worlds. But there were no subplots. The chase was straight forward.

My minor gripes aside, this was a fine entry in the Corbett series and an enjoyable read. It is not as dense and layered as the earlier entries, but shows another side of Corbett – the Matthew Corbett tried by physical challenges rather than mental.