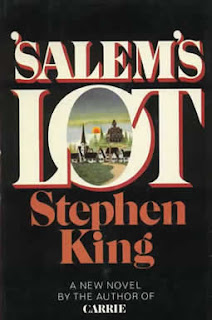 ‘Salem’s Lot was Stephen King’s second published novel. In it, we see King take a giant leap forward from the author who penned the engaging, yet straightforward Carrie to an author with a knack for telling a complex story with deep, rich characters.

Perhaps what King does better than any other writer is develop the character of a town, melding its inhabitants into something greater than the sum of its parts. We saw him do this with Castle Rock, Maine in The Dead Zone, Cujo, and Needful Things.

We also saw him do it with Derry, Maine in IT and Insomnia. Before those fictional municipalities of horror, however, was Jerusalem’s Lot, or ‘Salem’s Lot as the locals called it. In the book of the same name, he builds the various characters that make up the town of ‘Salem’s Lot, then lays waste to it.

The story is a standard vampire story. All of the traditional mythos first put into fiction by Bram Stoker in Dracula and carried forward by writers and filmmakers for more than a century are left intact. King transports the vampire mythos from central Europe to New England of the American 1970s.

Writer Ben Mears returns to the small New England town where he spent several years as a youth. He comes seeking inspiration for a new book and to confront demons from his past. Both can be found in the Marsten Houe – and old mansion on a hill overlooking ‘Salem’s Lot. There, as a child, he experienced a ghastly fright when, as a child he entered the house on a dare, only to see the ghost of the house’s owner, Hubey Marsten, hanging by his neck.

Mears comes to ‘Salem’s Lot to rent and live in the old Marsten house. He finds that he is not the only new resident in town. Prior to his arrival, a pair of elderly European gentlemen purchased the home and leased a vacant storefront with the stated purpose of renovating the mansion and selling antiques in town.

Soon, bad things start to happen in the Lot. First, a dog is killed and put on display at the village cemetery. Then, a young boy is attacked by an unknown creature and disappears into the woods. Soon, the whole town falls victim to the vampire Barlow, leaving Ben Mears and young Mark Petrie – a boy of just 10 – to rid New England of an ancient evil.

‘Salem’s Lot was the first novel many King fans read and for many, it’s their favorite. Most serious fans of King’s work rank it below more terrifying and better written classics such as The Stand, It, and The Talisman

King is not the first writer to bring vampires to the United States. Richard Matheson did it in I Am Legend in 1954. But Matheson’s “vampires” more closely resembled zombies than the classic vampire portrayed by Bela Lugosi and Christopher Lee. Matheson’s creatures were intellectually stunted – not the devilishly clever beings of Stoker.

For just his second published work, King shows great maturity in forging the town and developing four or five strong characters – taking them through their arcs and leaving them dead or appreciably altered.

For the purposes of The Dark Tower, the Catholic priest, Father Callahan is important. In their apocalyptic encounter in the living room of the Petrie home, Father Callahan is left uninjured. But his faith is shattered Barlow marks him as God marked Cain. He leaves town in shame under the dead of night. It’s hard to believe that King envisioned Callahan making an appearance in The Dark Tower almost three decades later, but he was prescient when he wrote,

He would pray. Pray all night, if necessary. Not to the new God. Not to the God of ghettos and social conscience and free lunches. But to the God of old, who had proclaimed through Moses not to suffer a witch to live and who had given it to unto his own son to raise the dead. All my life for penance. Only. . . a second chance.

Callahan’s faith failed him in his confrontation with Barlow and Barlow let him live because he knew that moment of doubt would cause him a lifetime of pain.

Callahan will find his penance and redemption in another time in another world in Roland Duschain’s pursuit of the Dark Tower.

‘Salem’s Lot was written many years before the scope of King’s grand vision would take shape. It contributes nothing to the plot of the Dark Tower saga. It was written as a stand-alone novel and serves to introduce one of the characters in the story who emerges approximately half way through its telling. Nonetheless, time spent reading 'Salem’s Lot for the sheer joy of enjoying quality horror fiction was time well spent.

‘Salem’s Lot has twice been made into television movies. The first was broadcast in 1979, directed by Tobe Hooper and starred David Soul. The remake was done in 2004 by Mikael Salomon and starred Rob Lowe.
Posted by Brian Schwartz at 6:53 PM