As I noted in my review of Garris’ adaptation of the Stephen King book, Bag of Bones, Mick Garris has had an uneven track record in translating King’s work to screen. He was awful with Bag of Bones and pretty good with The Shining (considering the script he had to work with). 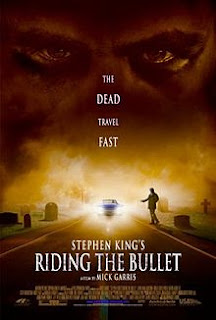 With Riding the Bullet, Garris deviates from straight forward storytelling and throws curveball after curveball in telling King’s tale of a young man on his way home to see his ailing mother. Sometimes the curveballs are outside the strike zone, but often, they are entertaining, occasionally zany, and make for a good movie.

King’s story opens with University of Maine college student, Alan Parker getting the call that his mother has had a stroke. Garris opens with some in your face character development. We see right away that Alan Parker is an art student with a flair for the dark and morbid. He is in art class where a nude model is posing for a group of students. While others sketch her as she is, Parker makes her into a zombie with a figure of death looming over her, much to the chagrin of his teacher.

Garris’ story is set in 1969 and it seems that Parker’s girlfriend has her heart set on a little free love. She wants to break up with him. Alan doesn’t take it well. He goes home, lights candles and soaks in a bathtub. He drinks, smokes a joint, and ponders the razor blade lying by the tub. He picks it up and holds it near his wrist.

The Grim Reaper walks in, hits the joint, and tells him to go ahead. In the Garris style of “gotcha!” the vision winks out of existence and Parker holds the blade to his wrist, summoning his courage. Just then his ex-girlfriend and a number of his friends burst into the room to shout “Happy Birthday!” He is startled and ends up cutting his wrist.

He recuperates in the hospital and his imagination runs away with him a number of times with dark fantasies of death as well as his girlfriend getting back together with him. She comes to visit him, chides him for his abortive suicide attempt, and gives him two tickets to see John Lennon and the Plastic Ono Band – her birthday gift to him.

He returns home to his two stoner roommates who are excited by the prospect of joining him at the concert. As they discuss their prospective road trip, the phone rings. He fantasizes that it’s his girlfriend asking him to come back to her. In fact, it’s his mother’s next door neighbor telling him that his mother has had a stroke and is in the hospital.

Alan tells his buddies to take the tickets and enjoy the concert. He starts the long trek from Orono to Lewiston, Maine, hitchhiking. As he walks, he recalls the death of his father and his mother’s grief. He recalls many fond moments and sad moments he shared with her as her only child.

He’s first picked up by a dope smoking pseudo hippy in a VW Bus who gets stoned and wrecks. This was a needless padding scene that added nothing to the story and was not in King’s story.

His second ride is the old farmer from King’s story that ruminates on his lost wife and yanks at his truss constantly. As he rides with the farmer who can’t keep the car in the right lane and has several near misses with head on collisions, Alan has conversations with “himself” who rides in the back seat providing Alan with advice. Himself’s advice is to get out of this guy’s car as soon as possible to avoid being killed. He convinces the old man to drop him off in the next town.

He walks out of town out into the Maine wilderness late in the night. His dark imagination runs wild. He also remembers his trip to Thrill Village and his abortive attempt to ride the park’s roller coaster, The Bullet. Alan and his mother wait in a long line to get on. When the time comes to get on the coaster, Alan chickens out. His mom, angry at him for making her wait in line and then bailing, clouts him on the head and won’t speak to him the rest of the day.

After being chased off the road by some rednecks in a truck, Alan makes his way into a cemetery. He stumbles upon the grave of a 19 year old kid named George Staub. Staub was born the same day as Alan and died two years prior to the night Alan finds his grave. Staub’s headstone bears a picture of the young man.

At first glance, Alan reads the stone’s inscription which says, “Fun is fun and done is done,” which is one of his mother’s favorite sayings. He takes it as a sign that his mother is dead. But Himself tells him to take another look where he reads the inscription as it really reads. Creeped out, Alan hits the road again.

After many hours of walking, a souped up 1960 Plymouth Fury pulls up and a young man offers him a ride. (Note that this is NOT Christine. Christine was a 1958 Plymouth Fury). Alan climbs aboard. Himself is in the backseat and is immediately panicked about the car and its driver. He tells Alan to lie about who he is and why he’s hitching.

The driver, played over the top by David Arquette, introduces himself as George Staub. After a bit of verbal jousting, Alan claims to be car sick and asks to be dropped off. Staub refuses. Staub said it is the smell of the car that is making him sick. He says there are some smells you just can’t get out of a car.

He then launches into the oft-told tale of the guy who sells the expensive car for cheap because his wife died in it and it smells of rotten flesh. When I heard this tale as a kid (told to me by an Ohio State Trooper as fact) it was a Corvette. In Staub’s telling, it’s a Cadillac. Alan insists it was a Thunderbird.

Here we see that Garris, who’s already made it clear he is telling King’s story in a more avant garde fashion, really diverges from the standard horror movie formula by inserting a movie into a movie. After we see the scene with the man selling the car, telling some kid who happens upon it about how his wife died and laid dead for two weeks in it before he found her, we see the final moments of George Staub’s life play out on a movie screen. This movie within the movie is complete with a marquee and a trip through the theater lobby.

Staub finally gets down to business. He’s shown Alan his “I Rode the Bullet,” button he got on his final day of life and asked Alan if he’s ever ridden it. Alan lies and tells Staub that he has. Staub calls him out and says he’s lying, that he chickened out. He made his mother wait and wait only to chicken out on the ride.

Staub says they are approaching the city and it’s time for Alan to make a decision. George is the angel of death and he’s taking someone with him. He can take Alan or he can take Alan’s mother. Alan must choose before they pass the first house going into Lewiston. Alan, with his dark imagination running wild decides that death and its dark fantasies don’t have so much appeal and tells Staub to take his mother.

Staub laughs maniacally and then Alan wakes up in the cemetery. He believes it’s all part of his overactive imagination. He hitches a ride to the hospital in Lewiston.

He arrives late in the evening and is told that visiting hours are over. The nurse obliges him and makes the call to see if he can see his mother for a few moments to let her know he’s made it. Alan has several dark fantasies about how that call turns out before he’s informed that his mother has just received medication and he can have but just a few moments with her. As he turns to go to the elevator, he sees George Staub get in ahead of him. He panics and rushes to get to his mom’s floor. He find her room and is relieved to see that she is resting comfortably. She recognizes him and is able to talk. The stroke was minor. Alan is relieved.

She tells him that she dreamed of the day at the amusement park when they waited in line to ride The Bullet. She says she was mean to him and she’s sorry.

As he’s leaving his room, he reaches into his jacket pocket and finds George Staub’s “I Rode the Bullet” button there.

We then flash forward to current times. Alan is a graying baby boomer who never made it as an artist, but still enjoys painting. He tells us that his mother recovered and they enjoyed two more years together. He and that girl that broke up with him on his birthday got back together with him, got married, and divorced. He says that his mom quit smoking after her stroke, but picked up the habit again and it eventually killed her. The movie ends with Alan watching his mother lowered into her grave.

If one watches it as straight horror, the viewer is going to be disappointed. While the vehicle for telling the story is based in horror, it is about a young man’s relationship with his mother.

In his introduction to the story, King tells us that it was inspired by the death of his own mother. The story is an allegory about death and the feelings of guilt loved ones are left with in its immediate wake – memories of cruel acts and harsh words that can only pass between two people who love each other dearly. Garris is true to that sentiment and to King’s story and as a result, produces a good movie that is sometimes scary, sometimes silly, and quite poignant.

Garris keeps the viewer guessing as Alan’s fantasies play out straight from the story before the viewer is unexpectedly snapped back to the reality of the story. This method of telling King’s story would have been quite easy to botch and make the movie into a disjointed series of vignettes. Credit Garris for finding a surprisingly original and entertaining method of telling King’s story.

The movie is not without its faults. The Grim Reaper image is hokey and wasn’t really necessary. There’s a fantasy scene set in the amusement park with Staub chasing Alan through the park and Alan riding The Bullet with the Grim Reaper at his side which was silly and useless. While the vehicle of having Alan’s conscience appear as a manifestation of himself was usually done well, sometimes it was silly.

The movie absolutely bombed in the theater, lasting just a few days and drawing just over $100,000. It appeared on television just a few months after it left theaters.

With its faults, the movie is still entertaining and, if you’ve ever sat waiting as your mother lay dying (and I have), the subtext will resonate. If you’re looking for a “Stephen King movie” by which I mean a straight horror story, you will be disappointed.

Posted by Brian Schwartz at 4:31 PM