The Last Illusion
A private investigator is hired to watch over the body of a dead magician who died right after his final performance. The seemingly easy case – and money – gets much more difficult when the minions of Hell – with whom the magician made a deal for his incredible powers – come to claim the body. Instead of babysitting a corpse, the P.I. engages in a battle with demons as he travels from place to place, trying to keep the body safe. 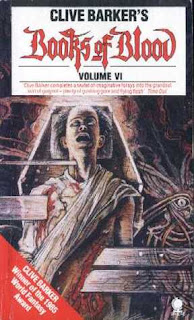 The Last Illusion was a little long for the amount of story it told, which is not usually the case with Barker’s work. Character and story development were scant. The narrative consisted of one action after another, without any background development. I cared little about the characters.

The Life of Death
Elaine is recovering from a hysterectomy and the breakup of a marriage. She is miserable and depressed. She returns to work and is asked to leave because she cried all day. On her walk home, she walks by a demolition site where they are tearing down an old church. She meets a man watching the demolition and they discuss death and the potential removal of the bodies from the crypt under the church. Thinking about death and her near brush with it, she decides to sneak into the crypt and see what’s inside. She finds a horrific scene of bodies tossed randomly, lying all over the place. Strangely, she’s not horrified. A few days later, she runs into the man she met earlier and they make a date. Elaine thinks she’s making a deal with death, but death is about to cheat her.

This was a brilliant, chilling story! Elaine is developed to the max and the twist is well conceived and well concealed. Fantastic imagery and a terrific, well placed plot. Everything that makes a great short horror story is here!

How Spoilers Bleed
A European company has purchased land in a South American jungle. Nearby is a native tribe which the Europeans treat with contempt. When it comes time to move the tribe, they refuse and one of the Europeans accidentally shoots a tribe member. The elder responds with a curse that makes the already delicate Europeans more delicate. The leader goes to the hospital and witnesses the death of one of his men who literally just falls apart. Also afflicted with the curse, he returns to the encampment to get the curse removed. However, new arrivals have slaughtered all of the natives – including the man who can remove the curse.

This story reads like Rudyard Kipling on LSD. I felt hot and sweaty as I read Barker’s prose. Barker finds just the right level of graphic description to impart to the reader how terrible the curse is. Another fine entry in this last Book of Blood.

Twilight at the Towers
A British spy is recruited to help a KGB agent defect. However, when he meets the guy, others are waiting for him and the agent finds out that he’s been double crossed by his own people, as has the KGB agent. The two enemies find out that they have much more in common with each other than they do with their respective governments who have developed them especially to oppose each other.

While I’m not against it in principle, I generally find the mixing of the spy genre with the horror genre to almost always end up falling flat (Robert McCammon’s Wolf’s Hour being the exception. This story is no different. There wasn’t much story, but there were a lot of words. Lots of action, but little character development to put it in context.

On Jerusalem Street (A Postscript)
A man named Wyburd is hired to obtain the Book of Blood as mentioned in the story of the same name from volume 1. He captures Simon McNeal, the man upon whose skin the dead have told their stories. Wyburd skins him, but ends up drowning in the blood that won’t stop flowing. He dies and arrives on the Highway of the Dead where he tells his story.

I went back to the first volume to reread the first story. This story is not a seamless transition from the first one, but it serves to bring the collection full circle, much as Ray Bradbury’s postscript to The Illustrated Man did.

The final volume of the Books of Blood was not the strongest, but contains two very good stories. It had fewer stories, but longer stories, which I did not like, but is a matter of taste. The Life of Death is some of the finest short horror fiction around and How Spoilers Bleed is well worth the time taken to read it. The Postcript is good at bringing the whole collection to a close, linking it to the first story.

Posted by Brian Schwartz at 7:48 PM