Introduction
Hakiem the Storyteller is now the right hand man and advisor to the Beysib princess who rules over Sanctuary. One day, the princess is approached by Beysib and human fishermen, asking to be allowed to build a new boat for better fishing. She is going to deny the request as a waste of resources, but Hakiem points out that Sanctuary will be easier for her to rule if Beysib and humans start working together. This is the first signs of cooperation. She ultimately takes her advice and Hakiem is pleased to still sit high in her councils. However, one sits higher, the Prince Kadakithis who is now her lover. 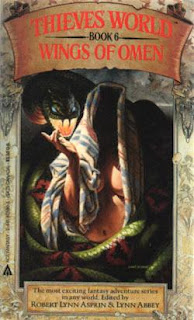 Asprin always writes a great introduction to set the tone of the Thieves’ World books. This is no exception. Too bad other writers in the series don’t read it before writing their own stories.

What Women do Best by Chris and Janet Morris
Kama, an assassin of the 3rd Commando and daughter of Tempus, leader of the Stepsons, comes to Sanctuary to unite the small, feuding factions of human revolutionaries to fight the Beysib. Invitations are issued to all and almost everyone shows up for the meeting. One revolutionary, Zip, sits it out. But when a key member of the newly formed alliance is kidnapped by the witch, Roxane, Zip tells Kama where he can be found. The kidnapped man is rescued and Zip, wounded by Kama’s bodyguard, is nursed back to health by Kama. They fall in love.

Of all the stories Morris has written for Thieves’ World, this is by far the best and most coherent. The theme throughout the story is women in leadership positions. The Beysib assassins are led by women. Kama, who wants to lead the revolution to liberate Sanctuary is a woman. Roxane, the wizard whose only motive is to bring about chaos is a woman. Yet, Morris doesn’t write a cohesive story until she’s writing about women with the help of her husband. Interesting. . .

Daughter of the Sun by Robin W. Bailey
Cheyena, cousin to Prince Kadakithis arrive in Sanctuary. She meets with her cousin, whom she loves dearly, then meets with the Beysib Emperor, whom he loves dearly. They do not hit it off and part with a great deal of tension between them (which I’m sure will be fodder for future stories). Cheyena is in Sanctuary because her uncle, the Emperor of Ranke (Kadakithis’s father) has been murdered, along with the rest of the royal family. She fears the 3rd Commando has come to Sanctuary to kill Kadakithis. She goes to the Vulgar Unicorn where she meets Hanse, the thief and learns a great deal about Sanctuary and its ways. She also has a meeting with her god, Savankala. Savankala tells Cheyena when the attempt will be made on Kadakithis’s life. When the time comes, Cheyena arrives and fights off a group of assassins, although they don’t appear to be 3rd Commando. She moves to save her cousin’s life when the Beysib princess and her retinue of guards arrives, informing Cheyena that they’ve already prevented the assassination. The Beysib emperor promises to hold a party, welcoming Cheyena to Sanctuary, although tension remains between the two women.

This was a taut, well told tale that introduces a new author, a new character and a potential new story line to the Thieves’ World canon. This is good because the old characters and old story lines and characters were getting dull with no new characters to develop them.

A Breath of Power by Diana L. Paxson
Lalo, the magician who can paint what lies beneath the skin of mortal men and reveal their true natures has a new talent. He can bring his paintings to life. One evening, he has a fight with his wife and goes to the Vulgar Unicorn to drown his sorrows. Egged on by his son and Cappa Verra, he paints a black unicorn on the wall of the bar and brings it to life. Every evil deed done in the unsavory tavern is embodied in that unicorn which is set loose upon the people of Sanctuary. It also draws the attention of every Mage in the city. One mage, Lythande, decides to help Lalo right the wrong he committed in his drunken bitterness.

I like Lalo better than any character in Thieves’ World, but this story was not his finest hour. It was rather dull because Paxson did very little to develop the unicorn as an evil creature. It was created. It left the Vulgar Unicorn, and returned when drawn back by Lythande. What evil deeds did it do in between? The reader doesn’t know. Lalo’s peril would have meant so much more with a little more action in the story.

The Hand That Feeds You by Diane Duane
Harran, a former priest of the now-forgotten goddess, Siveni, now works as a barber and healer for the Stepbrothers. He lives with his dog and an idiot girl named Mriga whom he uses as a slave and a concubine. Unhappy with his lot in life, he decides to use his old skills as a priest to resurrect Siveni. He completes the ritual and Siveni returns to the world. But she’s not as he remembered her. Instead of goodness and mercy, she is full of bitterness and anger toward the gods that usurped her and her kind. She immediately proceeds to the temple of the Rankan god, Savankala to challenge him to a fight. Appalled at what she is doing, Harran demand that she stop. The goddess turns her wrath on Harran and beating him down when he is rescued by an unlikely savior. Harran finds that he’s created a new goddess with his ritual.

This is precisely the kind of story one would hope to get when reading a short story anthology like Thieves’ World. It isn’t just another chapter written by another author, in someone else’s story. It is a fantastic stand-alone story that uses the characters and setting of Thieves’ World to the maximum advantage. The Hand That Feeds You is one of the best stories in the entire collection to date.

Witching Hour by C.J. Cherryh
It’s a night of chaos in Sanctuary as the witch Roxanne unleashes terror and devastation on the city. Meanwhile, the Piffles (People for Liberation of Sanctuary) led by the 3rd Commandos are attacking Beysib ships. Each faction leader gets reports on attacks and defenses of their interests.

C.J. Cherryh was the most distinguished contributors to the Thieves’ World series by book six. Yet, her stories are just phoned in. This story jumped from point of view to point of view with no seeming logic or connection between events. Cherryh has won a Hugo for crying out loud! Her stories ought to be the best in every Thieves' World book. Instead, they are among the worst. Witching Hour was damn near unreadable.

Rebels Aren’t Born in Palaces by Andrew J. Offut
Zip and Kama want to hire Hanse (Shadowspawn) to enter the royal palace and steal the Beysib queen’s ruling staff. They have heard of his earlier entry to steal Prince Kadakithis’s staff. Reader’s are treated to Hanse’s backstory (much of which he can’t even recall, having voluntarily had it stricken from his memory). Hanse was favored by the goddess, Eshi, who granted him unlimited wishes for ten days for having slain a rival god. Hanse uses the wishes for women and money, but gets bored with it. He also regrets using a wish to entice a young S’Danzo to his bed whom he actually loves. Hanse agrees to go through with the plot and gets the goods for the PFLS. He then leaves town with his beloved S’Danzo and is reunited with his old friend, Tempus.

Getting Hanse’s backstory was great. However, the story suffered because the transition from present tense to backstory was hardly seamless and was difficult to follow.

Gyskouras by Lynn Abby
Illyria the S’Danzo is visited by Zip, who asks for his fortune to be told. She develops and uneasy feeling about him and when she reaches out with her senses, she is touched by another entity much stronger. Zip tells her that he’s been making blood sacrifices at an alter he’s constructed to the dead god Vashanka. Illyria, frightened, orders Zip to leave. After Zips departure, Illyria’s son becomes ill, crying black tears, apparently having been touched by this other being. Soon, Sanctuary is beset with storms, followed by a solar eclipse. People are panicking and threatening Illyria and her husband, blaming them for the misfortune. Eventually, Illyria is drawn to the palace where a divine child is being raised by the Vashankan priest, Molin Torcholder. She brings with her her son. The two children, one full of rage and one very ill, find peace and health in each other’s company.

This story has a great concept, but is not well written. Abbey’s conception of Zip is much different than other authors and totally inconsistent with what we know about him. This is not explained, nor even hinted at. How Illyria’s child was touched by this other being is not explained. Precisely what is a Gyskouras is not explained. It feels like a set up for the next set of stories, but there is too much ambiguity there and the character, Zip, is going to need some major rehabilitation.

A Fish With Feathers is Out of His Depth by Robert Lynn Asprin
The Beysib Monkel, who oversees the fishing operation at the wharf near Sanctuary is smitten with another Beysib who works at the palace. Determined to find an appropriate gift to impress her, he decides to trap a wild, native bird and tame it to give to her. He catches the bird and is eventually able to tame it. When he goes to give the bird to the object of his affection, the bird embarrasses him badly. But all’s well that ends well in Beysib love in this story.

This was a nice, lighthearted story to end the sixth installment in Thieves’ World. As was demonstrated in the first story, while chaos reigns in Sanctuary proper where men kill Beysib and Beysib kill men, life on the docks for the fishermen is one of mutual respect between the two races.

Wings of Omen is significantly superior to Face of Chaos. The stories are more independent of each other and can be enjoyed on their own merits (with a couple exceptions). Authors do not appear to be laboring to advance a preconceived plot and are free to work with their characters and their own plots.

The best stories are front loaded and the book becomes a bit of a chore to read as it goes along. While none of the books that have followed have lived up to the expectations created by the first one (since the notoriety and quality of the authors has decreased substantially), Wings of Omen is one of the better installments in the series.

Posted by Brian Schwartz at 4:51 PM