Apparently, Stephen King felt the end of The Shining was not the entire story of Danny Torrance. Danny was still very much with King after all these years and he decided to revisit the man who was the boy who survived the Overlook Hotel back in 1975. 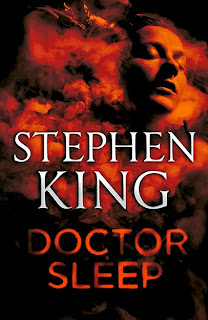 Danny of the late 1980s is an alcoholic and drifter. He moves from town to town, drinking himself into oblivion and working as an orderly in convalescent homes until they eventually fire him. One morning, he wakes up in a strange apartment with a strange woman beside him. He decides to take her money and leave. As he’s doing this, a toddler walks out of his bedroom. Danny feels guilty about taking the money, but not guilty enough to put it back.

Meanwhile, a group of vagabonds known as the True Knot are criss-crossing the country in their collection of buses and RVs. They are ageless, timeless beings in human form that sustain themselves by feeding off of the energy of children who have the Shine. They are wealthy and ruthless. Danny doesn’t know of their existence.

Little Abra Stone is born and immediately her parents know there is something special about her. She can conjure Beatles tunes out of thin air as an infant. She can make things move and she can predict the future. As she grows older, her parents see these abilities shrink until they are almost gone. But Abra is hiding a secret. She is more powerful than ever. She’s also looking for a kindred soul. She finds one in Dan Torrance.

Danny lands in a New Hampshire town and meets a man who runs the town’s train tour. They become friends and Danny lands his first job there. It is through his boss that he finds Alcoholics Anonymous and gives up the booze. He later takes a job in the town’s hospice center and lives there as well.

At the hospice center, he’s known as Doctor Sleep. Danny has a special talent for helping the terminally ill pass over peacefully. He doesn’t kill them. He eases them into death with his mind.

Eventually Abra, now 12, makes contact with him by writing messages on his chalk board with her mind. The messages are casual and friendly until Abra senses the murder of a little boy in Iowa. There, the True Knot have taken a boy with a knack of knowing what the pitcher is going to pitch before the pitcher does, tortured him, and taken his “steam” to feed upon. She doesn’t know where this murder occurred until she sees a missing child bulletin with the boy’s picture on it. From that, she is able to find the location where he was murdered and buried.

She reaches out to Danny who reluctantly meets her and Abra lays out her story. If she can get her hands on the boy’s baseball glove, she can find the True Knot. She knows about them because their leader, Rose the Hat, sensed Abra and tried to enter her mind. But Abra sensed her first and put a mental hurting on Rose.

Meanwhile Rose is obsessing over how to get to Abra. Her steam could feed the True Knot indefinitely. She dispatches a team east from their campground, located high in the Rocky Mountains on the site where the Overlook Hotel once stood. But Abra and Dan know their coming. Transferring her conscience into Dan’s body, Dan lures the True Knot people into a trap and he and his friends kill them – all but one.

One guy goes to check out Abra’s house. There, he finds her walking home from a friend’s house. He grabs her and injects here with a sedative. He then steals the truck Dan’s friend was sitting in, watching over Abra, and they head west.

Once Abra is able to shake off the effects of the drug, Danny is able to enter her mind and outwit her kidnapper. Abra continues west to meet with Rose the Hat and the remnants of the True Knot to see who is most powerful with the Shine and to fight to the death and beyond.

My mind was set on hating this book. I really wanted to not like it. I thought The Shining was such an incredible novel and Danny Torrance such a well crafted character, I didn’t want anybody or anything to alter my perception of them. With bad memories of what Black House did to the character of Jacky Sawyer, I waded into this novel with a great deal of pessimism.

I ended up devouring this novel like I’ve not devoured a book in a long time. Four reading sessions later, I loved Danny Torrance (now Dan Torrance) even more.

I liked him because he was flawed. He had the same demons that his father had – alcoholism coupled with a bad temper. His theft from the young woman who he later found out was murdered really set up Dan Torrance as a flawed, but sympathetic character. This is precisely where King went wrong with Jack Sawyer, making him into a supercop and psychic extraordinaire.

Rose the Hat was an excellent embodiment of evil and the True Knot was a clever, well developed vehicle for evil. I loved the psychic vampire character and Rose was a vampire as well developed as Kurt Barlow and more menacing.

Abra also had just enough flaws to make her human. Danny Torrance was strong with the Shine and Abra Stone was stronger than Danny. But she also had a temper and sometimes used her powers to do mean things to people. King shows he hasn’t lost his knack for writing from a child’s point of view.

The whole “Doctor Sleep” angle was used just enough to remind us of Danny’s essential goodness. It would have been easy to overplay this early and often. King showed us this talent a few times, then employed it in the plot at just the right time with maximum effectiveness. It reminded me a little of John Coffey and how his talent brought about the climax of The Green Mile.

This wasn’t a white-knuckled gripping ghost story like The Shining. Like The Shining, it was a battle of innocence versus evil. This time, the battle was fought with minds across a continent. The pace was uneven, but in a good way. We lived Danny’s life as a recovering alcoholic as he developed as a character and the fight to bring an end to the True Knot was fast paced and exciting.

While it is a sequel to The Shining, King does not rehash the plot of that excellent novel, nor does he rely on its plot elements to drive this story. There are just enough references to The Overlook, its inhabitants, and the doomed Jack Torrance to remind us of that young boy with a power that tormented him into adulthood. This story, slightly altered, could have stood on its own without having been linked to The Shining at all.

I think we can close the book now on Dan Torrance. I know Stephen King loved the character and felt that there was a story in Danny’s adult years. But I know he’s wise enough not to publish a series of “The Adventures of Danny Torrance” stories.

So now we know what happened to that kid who brought down the Overlook Hotel and its evil minions by remembering what his dad forgot. As much as I didn’t want to like it; as much as I feared having The Shining and Danny Torrance ruined for me, I am glad that King chose to let us in on his life after The Overlook. Doctor Sleep was a fine novel.

Posted by Brian Schwartz at 7:09 PM