The Running Man By Stephen King writing as Richard Bachman

In the year 2025, the best men don’t run for President. They run for their life. 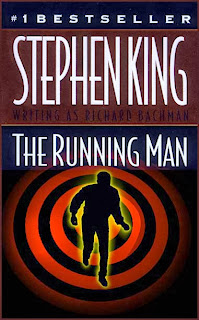 The year is 2025 and Ben Richards lives in Co-Op City with his wife and infant child who has the flu and is quite ill. Richards cannot afford to buy real drugs that will help his daughter. So, he leaves the tenement behind and goes to the Network where he is screened to be a game show contestant.

In 2025, the Network is king. It governs and provides entertainment via the Freevee which killed newspapers and most other forms of entertainment. The shows produced by the network are usually life and death matters like “Treadmill to Bucks” where cardiac patients run on a treadmill while answering trivia questions. If they live, they earn.

The big show is The Running Man. It is for this show that Richards has qualified. He has to stay on the lam for 30 days while hunted by professionals hired by the network. Viewers are invited to phone in tips and can earn money if their tip leads to a kill of the Running Man.

Richards meets with the producers and the host of the show who are eager to have him compete. They have high hopes that his cunning and anti-establishment behavior will generate ratings. After the meeting, he is treated to a few days of high living in a fancy hotel room with all the booze and food he can consume.

He is then set free to hide for 30 days. Each day he lives earns his family money. He must mail in two tapes a day of himself for the Network to play.

He buys fake papers and he travels, first to New York and then to Boston. Always in disguise, he hides in lonely hotels and YMCAs. In Boston, he thinks he sees the hunters outside the YMCA, so he blows the place up and slips out through a storm sewer in the basement.

After escaping from the sewers, Richards meets a kid who takes him in and teaches him about air pollution and the conspiracy run by the Network to hide science. The kid also helps him acquire a car and gives him a contact in Portland, Maine.

Richards makes it to New Hampshire and poses as a blind priest. There, he spends his days at the library, reading about pollution. His video tapes consist of his rants against pollution and the collusion to hide its effects. The Network talks over them when the program airs, so nobody hears him. Finally, after a few days, he gets nervous and decides to get out of New Hampshire and head for Portland.

He gets to Portland and meets his contact. They go to his home, but the kid’s mother calls the Network and turns Richards in. He flees, but the hunters catch up with him and he is wounded in the side and breaks an ankle before eventually escaping.

The next day with the hunters closing in and every resident in the area looking for him, he takes a woman hostage and makes her drive. Richards uses her to generate publicity about where he is, figuring they can’t kill him without killing her and they can’t kill her in public. He has the terrified woman drive to the airport in Derry, Maine.

Claiming that he’s acquired enough explosive to blow up several acres, he demands an airplane be supplied to him. When the plane arrives, he demands that the head of the hunters join him aboard the plane. Once aboard, Richards is contacted by the network. His wife and child have been murdered. Now free of family burdens, they offer him amnesty and a position on The Running Man as the new hunter.

Richards accepts their offer. He then kills the hunter aboard with him and the flight crew who all work for the Network. With the plane’s controls in his hands, he heads for the network building, coming in low. . .

All I could think about as I read this book was “Bread and Circuses.” This Roman concept held that if you gave the masses enough food and entertainment, they would be distracted from corruption and not bother the ruling class.

This book has a subtext of class warfare that is at the fore. In 2025, the rich and the middle class hate the poor. They are a burden and to pay for their burden, they must entertain.

King wrote The Running Man in just one week. He described himself as angry and obsessed with the craft. Given the time period in which it was written, one might wonder if he wasn’t stoked with coke as well.

Of the books written under the Bachman pen name, I would rank The Running Man just behind The Long Walk. It is far superior to Rage, Thinner, and The Regulators. The Long Walk had just a little more subtlety about it that I liked.

In 1985, a movie was made loosely based on the novel. It starred Arnold Schwarzeneger as Ben Richards. It played up the game show angle (with the legendary Richard Dawson serving as host of The Running Man) and played down the class conflict. Also appearing was Jesse Ventura. Two future governors appeared in the same movie.

Posted by Brian Schwartz at 6:24 PM